While a strong year-end stock market and giving in response to COVID-19 and racial justice efforts drove growth in contributions, a tumultuous year created an uneven picture

Giving USA just released the latest data on charitable giving, and one thing is certain: Americans responded with incredible generosity to the challenges of the past year.

In 2020 the lion’s share of giving came from individuals, foundations and bequests.  All three of these are driven by the charitable intent of individuals, a reminder to fundraisers that no matter what the markets are doing, a relationship-based focus within our work is key. Giving USA’s national report parallels what we learned in North Texas through our Covid-19 impact survey. Many human service organizations saw an increase in giving, from new and repeat donors, whereas arts organizations had a tougher time in 2020. Taking a deeper dive, advancements in technology and broader use of fundraising tools yielded strong results. As I see it going forward,  the use of technology in fundraising, especially for donor acquisition and stewardship, coupled with strong relationship management techniques, is the recipe for building a strong development program.

The report is packed with valuable research and insights for our work, and I highly recommend securing your own copy. In the meantime, read a few of our takeaways: 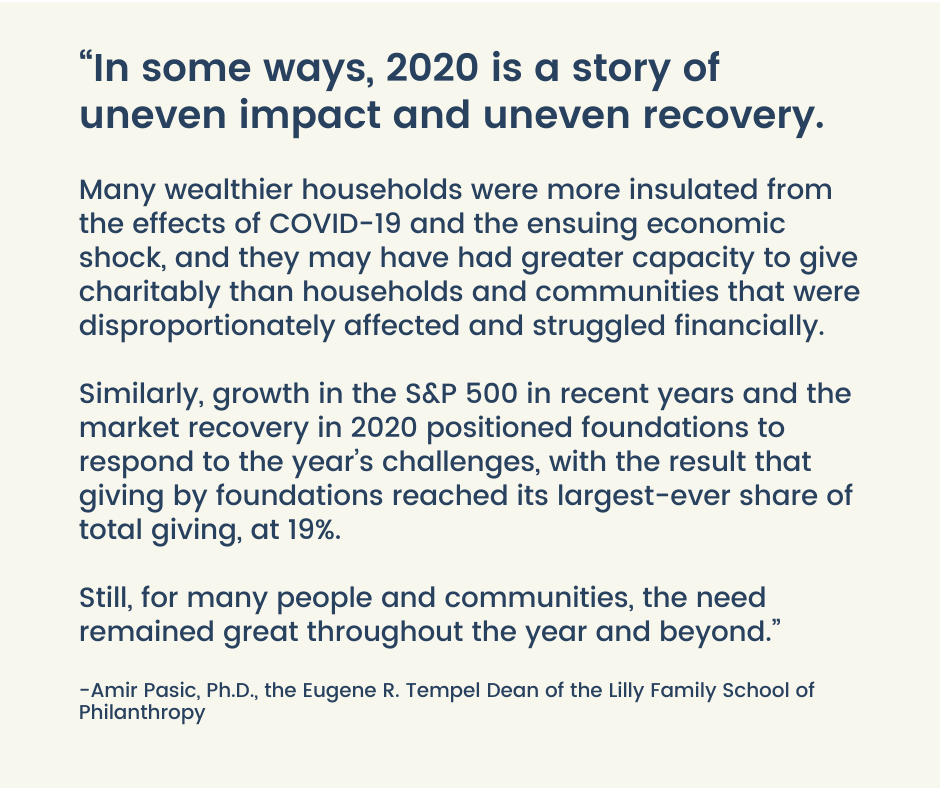 In a year where giving played an unprecedented role, it’s important to consider not only the enormity of this number (topping 2019’s $449.64 billion) but also the context in which it was given.​ In 2020 we experienced not only a global epidemic, but also an economic, racial and social justice crisis. We want to celebrate charitable growth, the resilience demonstrated, and the nonprofit sector’s ability to innovate, while recognizing the magnitude of the hardships our communities faced. ​

#2: The economic, social & political environment had an impact on giving

In the past five years, giving to public-society benefit organizations, environmental/animal organizations, and human services organizations saw the highest rates of growth. ​Religion has had the slowest rate of growth in the same time period.

The decline in giving to health was a surprise to many, but the category encompasses the “big disease” organizations, many of which are supported by large in-person fundraising events, like walks and runs. When these events were canceled or postponed fundraising efforts suffered.

Arts, culture & humanities were particularly impacted by shutdowns of in-person programming. The category experienced a significant decline in 2020. However, there is good news: the two-year change in giving percentages was positive.

Last year was challenging according to many economic measures. GDP declined by 2.3% from 2019. However, the passage of the CARES Act and the COVID-19 vaccine helped markets rebound in the second half of the year when most charitable giving occurs. By the end of 2020 the S&P 500, which is closely related to giving, grew 16.3%, and personal income, a factor that is significantly linked to individual giving, grew 6.1%.

For 66 years, Giving USA has provided comprehensive charitable giving data relied on by donors, fundraisers and nonprofit leaders. The research spans 53 million households, nearly 16 million corporations, over a million estates and approximately 82,000 foundations. Donations made to all of these entities ultimately go to nearly 1.1 million charities, and an estimated 300,000 religious organizations across the U.S.

The report is produced by Giving Institute, in partnership with the Indiana University Lilly Family School of Philanthropy.

M. Gale & Associates is a member firm of the Giving Insitute.

Considering the results of 2020 and the hybrid experiences that have evolved in 2021, your organization may require a deeper dive into your fundraising results and a laser focus on sharpening your plan for 2022. Contact us today for help analyzing your fundraising program’s ROI, and to build a plan you can count on. 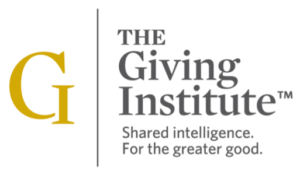